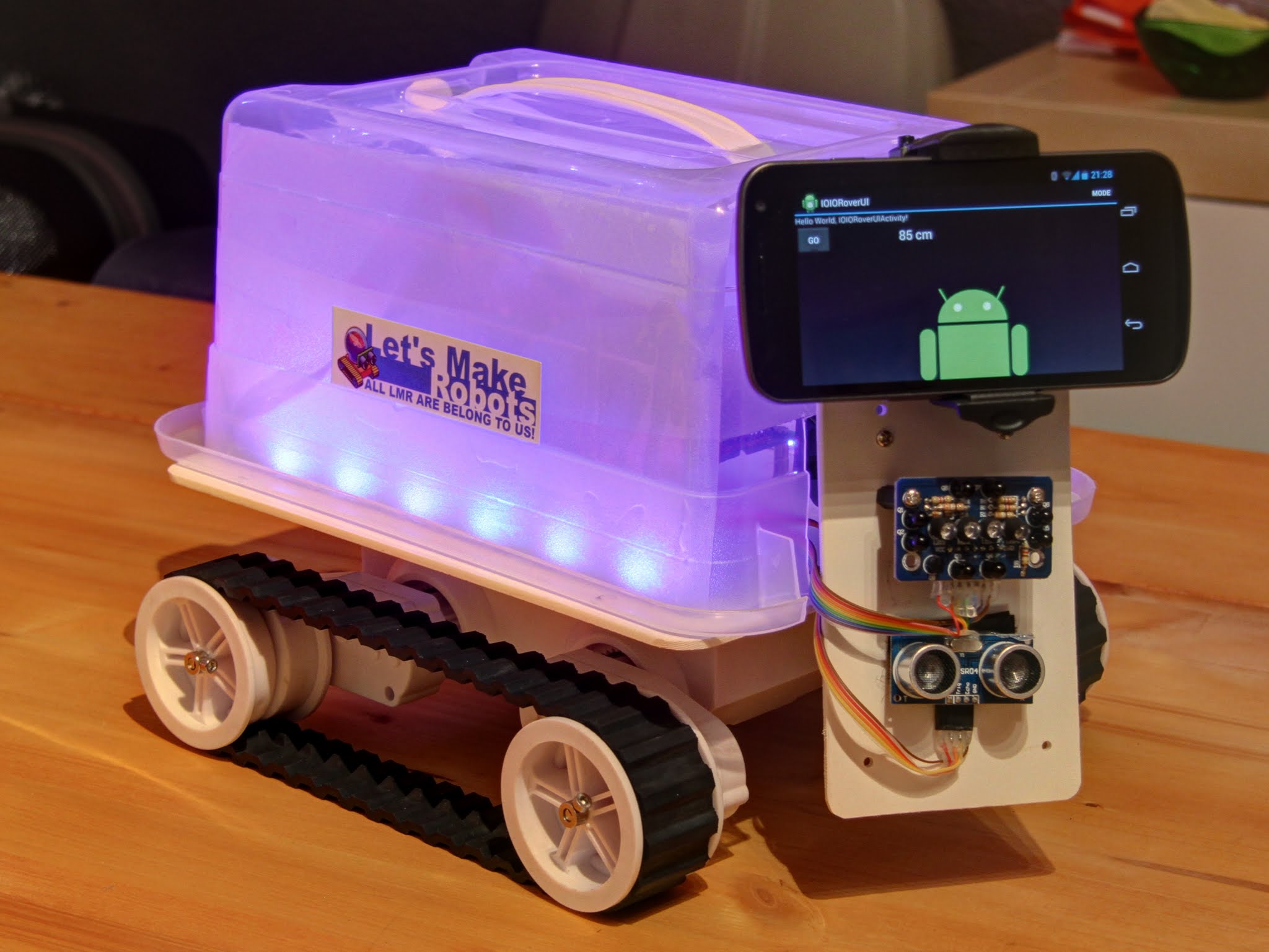 This is IOIO-Rover, my actual robot project. I has taken a long time to get it working, due to hardware and software problems. The project started 8 month ago. I’m not working full time on it. And most of the time I spend to learn Java and how to write Android apps.

The IOIO-Rover will be used as our new house guard. It can drive around through our home when nobodys home and will check for intruders. Later on I hope it will be possible to start the robot with a phone call and watch live video via Skype or a G+ hangout.

The original Dagu 4WD motor controller makes me a lot of problem. Just 1 week before Campus Party 2 more motor drivers died wih blue smoke. After changing the motor controller with an RN-2V, all problems disappeared. During Campus Party the tilt servo dies. I realized that the lever is too big, to hold the phone. But it’s too late to change this now. I need to redesign the complete pan/tilt section.
View from above showing the BlinkM Max, the IOIO board, the pan/tilt servo and the cliff sensors

Only an Android Java app has to be written. Using the IOIO API library for Android is quite easy. But I ran into problems using the front camera. It seems that the Samsung Nexus phone doesn’t like it, when the camera preview is only faked to make the compiler happy, not a real preview with a SurfaceView element.

The IOIO rover has 4 autonomous modes at the moment and 1 remote controlled mode using Bluetooth. The modes of operation are shown on the screen with different animated background pics.

The robot just do nothing. Just sit and wait. But all sensors are working. The distance to an object is shown on the screen and by using the RGB LEDs. Red for very close, yellow and green for near objects, blue for no objects.

The Chameleon mode doesn’t work either, because of the camera problem. The robot should drive around and when it detects an obstacle it should change the color of the robot to the color of the detected object.

The Paparazzi mode doesn’t work yet, because of the camera problem. The robot should drive around and take pictures automously, when it detects a face.

The Stalker mode works good. It follows an object with the servos using the IR compound eye. The ultrasonic ensor has been use to keep a constant distance between robot and object.

For remote controlled mode a seperate app has been used. You can drive around and move the pan/tilt servos in all directions.

IOIO-Rover take part on the „Best of Show“ robot contest on Campus Party Berlin. It won 3rd prize in the software section. What a surprise, because the software is far from being complete. I worked on the software until 1 hour before the show. When I try to test the remote app, it wasn’t there. After reinstall the remote app my autonomous app disappeared. WTF, so I decided only to show the autonomous app. No time to reinstall another app during the show. Each participant has only 7 minutes to show its robot.

Finally I found the time to create a video for my IOIO-Rover. So far no solution for the camera issues. So I’m not sure if this project will ever be continued.